Home » How to Fix a Wet Phone and What You Should Never Do?

You’re having a bad day already, but things just got a whole lot worse; you’ve dropped your phone in water and you don’t know what you should do. The first thing to do is take a deep breath and don’t panic. Then, take your phone out the water as quickly and carefully as you can.

At this point, you’re probably recalling stories you’ve heard about uncooked rice, kitty litter and other mobile rescue folklore. Try and get those out of your head, because they won’t work and could cause even more damage to your already injured phone. Also, don’t fiddle with your phone, press any buttons or try to power it up.

The main cause of permanent damage to phones that have been exposed to the wet stuff is the immediate behaviour of their owners. So, in order to stop you from causing permanent damage to your sodden phone, we’re going to tell you why some well-known remedies don’t work and detail exactly what you should do.

Move Quickly but Steadily and Avoid the Rice!

Ok, here is a non-exhaustive list as to what not to do with your wet phone:

Do NOT press any buttons
The reason for this is that if you do press buttons, you run the risk of pushing more water into the fabric of your phone. You don’t want to put even more liquid anywhere near the battery or electrical components that make your phone work. Also, if by some chance the phone is still on, you will cause the use of electricity and short circuit the phone.

Do NOT try to switch your phone on
While, technically, this falls under the above point, we just want to make it 100% clear that this is a bad thing to do. If you try and power up your phone when it’s wet, you’re absolute, most definitely, going to end the life of your phone there and then. Why? Because when you switch your phone on, electrical connections are made to run currents through the phone that make it work. Water and electricity don’t play well together and if you try to switch your phone on when its wet, you’re going to short out the electrical components within, thus, permanently breaking your phone. It will also limit the chance of professional data recovery experts from getting back your data.

Do NOT shake your phone
Shaking the phone is another way that could encourage the water that’s already in or on your phone, to move further into the parts of the phone where the components are. This is something you really need to try and avoid.

Do NOT use a hairdryer to dry your phone
Again, as well as having the potential to blow the water further into your phone, the heat from the dryer could cause additional damage.

Do NOT put your phone in uncooked rice or cat litter
We really do understand why this myth has been around for so long. Logic suggests that placing wet things into materials that naturally absorb water should work to take the water from the wet item to the dry absorbent stuff. However, rice and cat litter both have other little particles in them that could sneak into your phone and cause more damage. And, even if you have a friend, relative or colleague who swears this method worked for them, chances are it simply stopped them from handling the phone for a few days. In our (and other’s) expert opinion, placing your phone in rice or cat litter will at the best stop you from touching the phone and allow it to dry. At worst, it will introduce more foreign bodies into your phone and make the existing damage even worse.

Do NOT use a Vacuum Cleaner
That’s right, even though some guides recommend a small hand-held vacuum could remove some of the water from your phone, it’s not a method we recommend. Why? Because you might drop it, or damage it in the process and because the type of vacuum you likely have simply isn’t designed for this job.

The Best Response is to Call a Professional Mobile Repair Expert

We know, it’s only a bit of water, how hard can it be to dry it out and fix it? Dependent on how much of the phone’s motherboard and other electrical components have become wet after it’s dunking, it can be harder than you might think!

Think water is a pretty pure substance that shouldn’t really do too much damage to your phone – provided it’s been removed from the water and left to dry in a cool place, for a day or two? Think again.

Even safe-to-drink water contains minerals and chemicals that can hurt your phone. First of all are the naturally occurring minerals that include: calcium, sodium and magnesium. Everyone gets used to the levels of each of these minerals dependent on where they live – they vary from country-to-country and even region to region.

In addition to the naturally occurring minerals contained in the water that comes from your tap, are some small residue of the chemicals used to make it safe to drink. Chlorine and Chloramines are the main disinfectant chemicals used to treat water at local water treatment plants. Again, this is safe for you to drink and nothing to worry about – unless you’ve got a phone that’s taken a swim in it.All those minerals and chemicals will leave a residue on your phone, either on the case or screen or worse, within the phone and on the electrical components. And, that means that even when your phone dries out, these residues will remain and cause problems with your phone. In fact, even if your phone appears to work perfectly well after its dried out, those mineral and chemical residues will still be there and could be the reason your phone stops working properly a few days later. And just think, dropping your phone in water is a best-case scenario. Alcohol or soft drinks all contain sugar which is VERY bad for your phone and will further complicate the resolution of the accident.

All of these details – and more- are the reason why you should always make the decision to hand your phone’s care over to the experts. We have the tools, experience and knowledge to fix your phone, or at the very least retrieve the data from it, so you don’t lose any of that valuable data you’ve so carefully saved.

Ok, we’ve explained that the best solution to a wet phone is to call in the experts. But, we know that some of you prefer to do things yourself, even when you know it’s not the best option you have.

For those of you who insist on DIY wet phone recovery, we want to make sure you’re equipped with the right knowledge that will give you the best chance of success.

The steps we advise you to take are:

As you can, see, even when you take the steps advised by an expert, your phone might still be beyond help. In addition, your interference might also make data retrieval all but impossible, which would be a double blow.

Why a Paying for a Professional Service is ALWAYS Worthwhile

We know that when it comes to your phone it holds a ton of information, history and contact details that you really value. We also know that sometimes you might expect a mobile repair and data recovery experts services might be on the expensive side. But, if the data on your phone is valuable, then it’s got to be worth spending a little money on to preserve that data and avoid having to buy a new phone?

By taking the decision to use a professional data recovery service to save your wet phone, you will have peace of mind that people who know exactly what they’re doing are working on your phone. Another benefit is that iPhone’s can also be saved by experts. That’s because we have the right tools and agreements in place to get into your phone and take the correct steps to dry it out and fix it.

That means that if you’re ever unlucky enough to drop your phone in water or any other liquid, you need to stay calm, retrieve it from the water, put it down and give us a call. We know exactly what to and how to do it. 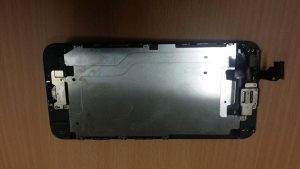 Close up of water damage and corrosion on and around the battery pack.

Water bubbles on the battery pack. 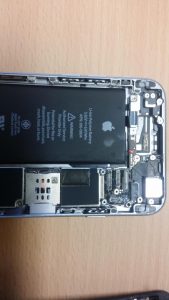 We haven’t included these images to scare you into using our service. We just want to give you a better understanding of exactly what happens to a phone that’s been dropped in water then switched on when wet.
The bubble in the battery was also possibly caused by the sudden increase in heat when the owner tried to switch it on, causing a short and further damage. That’s on top of the problems dropping a phone in water naturally causes.
This phone was brought to us after being dropped in water. The customer also tried to switch the phone on when it was wet then put it in rice which also left starch residues. As you see from the above images, there is corrosion on a number of different points on the inside of the phone.

It’s not a pretty sight, to the owner or to us. But, if the phone had been left alone and handed straight over to us, there would have been less damage and more chance of a full and quick repair.

We’re here to help you. Our expert mobile repair and data retrieval experience mean we’re your best chance of owning a phone that’s in full working order, even after it’s been for an unplanned swim!

May the 4th be with you!
Scroll to top